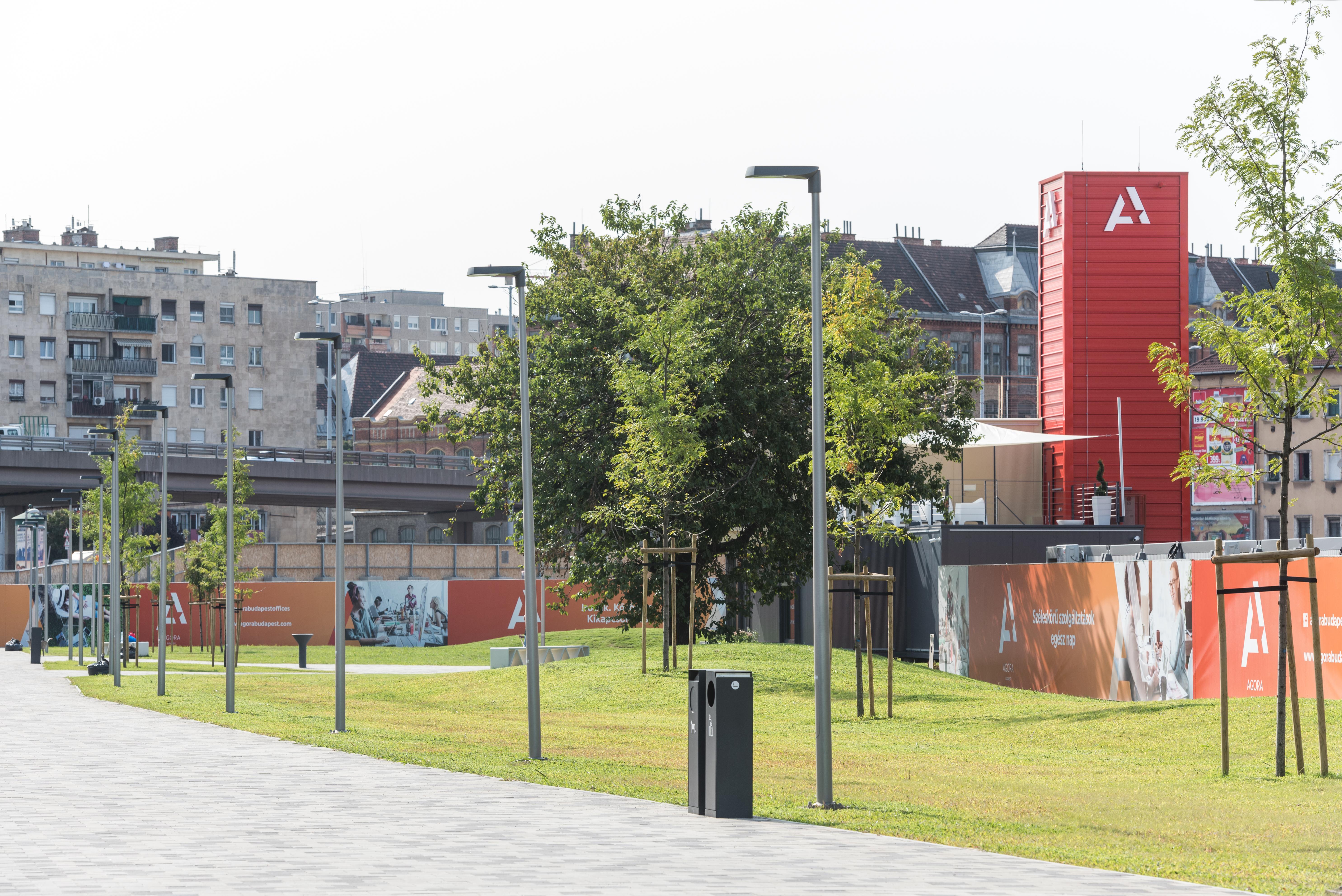 A 5,000 square meter public park and high-tech container viewpoint on the construction site of AGORA Budapest

The construction of AGORA Budapest has been in progress since March. The property developer of the project, HB Reavis, surprised the public of the capital city and its future tenants in an exceptional way with a 5,000 square meter green public park separated from its own construction site. In the middle of the site a 13 meter high high-tech office built out of shipping containers was set up for clients to give them insight into the project under construction.

Those passing by the Pest side of Árpád Bridge can witness an extraordinary sight: where a couple of weeks earlier there was only a construction site, there is now an immense green park. This is how HB Reavis is embellishing the environment in the first stage of the construction of the large-scale AGORA Budapest: the passers-by will expectedly be able to enjoy the advantages of the park for a year, and there will be varied community events according to the plans. Furthermore, a 3-level, 230 square meter container office, unique in Hungary, was also created on the site for clients who are thus allowed an up close view of the high-tech devices with which their future office is being built.

“We wanted to surprise people with a specialty that had never been seen before in Hungary, and that reflects the company’s philosophy that we at HB Reavis think in a people-centered and innovative way. The green park we created foreshadows how we will renew and make the environment more livable for those who live and work here, and for the entire community of Budapest through AGORA Budapest,” said Örs Kígyóssy, the acquisition and development director of HB Reavis Hungary. He added, “The greatest community appeal of the publicly accessible spacious areas and the office buildings to be constructed in the project is provided by the diverse services designed to meet everyday needs and the green area approximately the size of 15 tennis courts.”

The 13 meter high special showroom built in the park’s area is the only one of its kind in the country. Following 3-4 months of detailed planning, construction lasted 3 months and the task presented a new and exciting challenge for MádiLáncos Studio, the creator of the concept. “During the design and construction it was a challenge to create a building which represents the project in an innovative, sustainable and unique way, and all this made of actual shipping containers that were used in global trade,” said Áron Láncos, owner of MádiLáncos Studio and lead designer of the AGORA showroom. He said that while working with unconventional materials, they also had to make space for several functions in order to present the project appropriately. Meeting rooms, an event space and a terrace, a lounge and a 13-meter high viewpoint were created in the showroom. The industrial character of the heavy duty steel structure was compensated by a modern, simple design and special IT devices.

The first buildings of AGORA Budapest are expected to be completed by the first half of 2019, while the whole project is planned to be finished in 2023. As the recently presented park and the container viewpoint show, a multifunctional modern city centre is being built which will embellish the capital city, not only with unique contemporary architectural solutions, but also with green surfaces and community spaces. A priority objective of HB Reavis was to realize a people-centered development where people can work and spend their free time in an agreeable environment. The public spaces will be filled with life by community programs as well as shops and restaurants that will also be open on weekends.